The Journal of Affrilachian Arts & Culture

What the PLUCK! Goes Global

Since our last issue, I’ve been forced to see Affrilachia with new eyes. Many thought it a radical idea to ignore the government definition of Appalachia as denoted by the ARC in order to recognize almost a century of out migration patterns that forced individuals to leave the mountains, her many valleys, and foothills in droves and to relocate to factory towns and cities that promised jobs and money no longer available back home. Cities like Cincinnati, Atlanta, and Lexington have been huge beneficiaries of such movements that feel more like expansion than relocation. In most cases, these migrants never severed ties with their home lands and regularly made pilgrimages back across mountain roads for reunions, funerals, or most any excuse to sit on a porch with family after a good meal, a laugh, a sip, a song, even to cut a rug or two.

Being forced to regularly defend a definition of Affrilachia without imposing geographical boundaries on it has been a fight I have welcomed over the almost 30 years of activity of the Affrilachian Poets, but flying over coal mines and into the mountains and landing in the predominantly Black country, (yes I said country not county!) of Eswatini, formerly known as Swaziland; and reflecting on earlier travel to the mountainous regions of Ghana, Cuba, and Jamaica; and reconnecting with a former University of Kentucky student, who is now in Australia organizing poets and using my pedagogy to teach creative writing to Aboriginal poets of color, has forced me to think of Affrilachia as even more expansive than I had ever imagined.

Thanks to the U.S. Department of State and Furious Flower’s Joanne Gabbin, I had the privilege of spending a week on the ground in Eswatini teaching poetry to high school and college students. The highlight of the visits was being part of a major final event and live performance sponsored by the United States Embassy and featuring the work of students, local established poets and musicians, and the work of the poet/teachers that traveled with me from the States. And to make it feel like a perfectly round experience, many of the most exceptional poets traveled here to the States almost a year later to present their work at an anniversary event Furious Flower held at the Smithsonian National Museum of African American History & Culture on the mall in Washington, D.C.

While in Eswatini, it was a joy to recognize the common ground in the work of students. A love for the family and the land, Affrilachian bedrocks, shined through when my Eswatini students shared their work, especially work about Sebebe rock, the second largest granite monolith, after Australia’s Uluru. There was much wrestling with universal ideas like love and loss, but initially I was surprised at what seemed like a lack of interest in social justice issues in their work until I learned more about the political climate in this small African country, the last remaining absolute monarchy on the entire continent.

Ultimately when the poets performed and presented their work in public, all the power of poetry that initially felt suppressed made its way to the stage and was echoed in the audience members, especially when accompanied by music. Sharing a few photos was not enough. In the absence of a documentary or a live feed from the visit, it made more sense to simply dedicate a special issue of pluck! to the visit, invite some of the country’s best artists and writers to contribute, alongside work by the visitors. I hope all of you get to visit one day. The country is beautiful. The people are too. I hope you also enjoy what we have managed to put together from a half a world away. Affrilachia is officially an international idea. 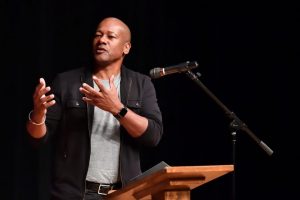 Absolutely stellar advice for the new to publishing in this thread. #mustseetv

5 tips for poets starting their publishing journey. Editors feel free to add your own best practices

Today is the first day you can submit your work for the @CrystalWilki Creative Writing Prize, judged by @damarishill author of the award-winning A Bound Woman is a Dangerous Thing

In collaboration with our friends @NewLimestone we are excited to announce the inaugural Crystal Wilkinson Creative Writing Prize. From 15 Jan to 15 Feb we welcome submissions of fiction, poetry, nonfiction, and other hybrid forms.

We are proud to announce our contest winners for t

Find Us On FB

You have successfully subscribed to the newsletter

There was an error while trying to send your request. Please try again.

Sign Up to get our newsletter & notifications from Pluck!